Should all-Latin answers be permitted?

As a companion to Should all-Latin questions be permitted?, the same policy regarding answers is probably worth considering separately. (brianpck even provides a handy example of an all-Latin answer to that same question.)

Many of the same considerations apply as with all-Latin questions, but I think they're worth thinking about and debating separately. For me, personally, as one relatively Latin-illiterate, if I hit an all-Latin question I'll probably just skip over it without much of a reaction. However, if I encounter an all-Latin answer to a question I'm interested in, not being able to understand it is actively irritating.

Write your answer in a way that you think would be most helpful for the person who asked the question.

That's how it works on all StackExchange sites. As for whether to answer in all English, all Latin, a mix, or to bring in other languages, let's have no rule—and no finger-wagging, scolding, or "discouraging". Let's leave that choice to the judgement of the person writing the answer. We have upvotes and downvotes to let the community render an opinion one answer at a time.

We can probably learn something from another successful StackExchange site, English Language Learners. There, people learning English are required to ask all questions in English and all answers are in English—even though many of the questioners are still working at a very basic level of English, and their questions frequently contain grammatical errors.

A good answer is written at a level of English appropriate to what was demonstrated in the question. Some English constructions, such as those with phrasal verbs, can be tricky for ESL learners to understand. So, with total beginners, I usually avoid phrases like "get over" or "get into". On the other hand, with some users (like LePressentiment, who is also here), sometimes I intentionally write a little above their level, since I know they're ready for it and interested in it. Sometimes that leads to another fruitful question.

By the way, pictures often help enormously. Here's a fine example by J.R., one of ELL's leading contributors, that very concisely addresses a subtlety of English grammar that often confuses ESL learners from non-Germanic languages: the way a preposition often follows (rather than precedes) a noun that it's indicating a relation to. This was made for a user who had been struggling with very basic English grammar: 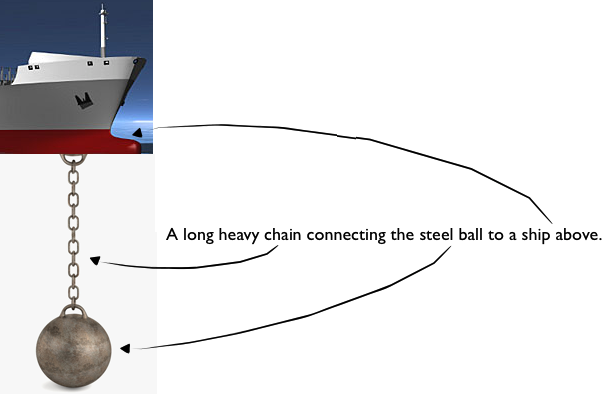 In this case, the troublesome preposition is above.

So I say, let answers be either in English or in the language of the question, or in Latin with an English translation or summary (everybody likes summaries...).

The reason why Latin answers may sometimes be desirable is that one often learns a language faster through immersion.

At any rate, I think "permitted" is a bit strong: if someone answers an English question in Latin, he should be encourages to add an English translation, but it should not be "forbidden" i.e. deleted.

If the question is in English, answer in English. If in Latin, answer in either language. Translations/summaries are encouraged.

I strongly disagree that we should encourage these.

As a beginner in Latin - which I think many are - my knowleudge of the language is far from extensive. I may not understand in full an answer to my question if it is only in Latin.

I'm more supportive of this if the asker requests an all-Latin answer, but this still may not help future readers.

Additionaly, English translations would help in these answers.

Not the answer you're looking for? Browse other questions tagged discussion site-policy answers .