How can we encourage more Latin Language SE users to support the Greek proposal?

Please click here to support. I screenshot our traffic statistics on Nov. 18 2018: 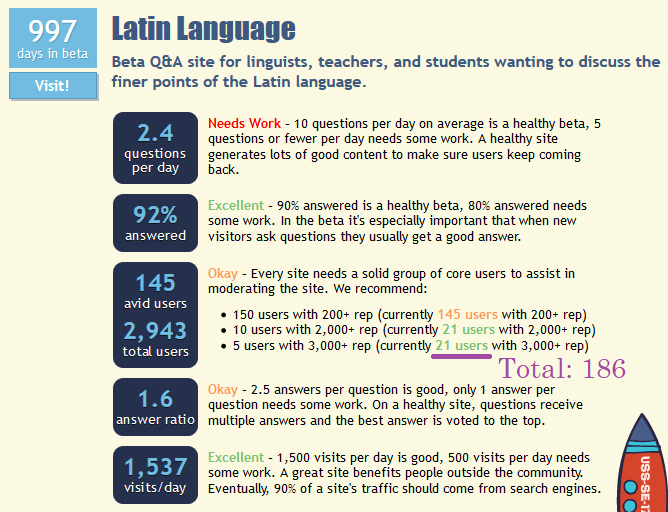 Am I right that 145 avid users aren't enough for the criteria?

The definition of "avid" is different in the two contexts. In the A51 statistics for our site (or any beta site) it means users with at least 200 reputation. They may have gotten that reputation in the first week and been absent ever since. For the launch of a new site through A51 you should have a sufficient amount of people who actually participate by asking and voting. This kind of "avid" has no hard numerical threshold, it's just a rule of thumb.

Anyway, users from this site are not going to be enough to get a Greek site started. There are not enough people, and only a small fraction of our 1500 or so daily visitors would have interest in helping launch a new SE site. The bigger issue is that users of this site will typically be interested in various forms of Old Greek. While that's certainly not bad, a Greek SE site should have Greek from all eras, including modern, to be viable. Therefore you need to go find that modern Greek community somewhere. And do it fast, or the proposal will run out of time!

If there are too many questions on ancient variants, folks interested in newer Greek will be dissuaded. It's important to keep a balance from day one. I added a couple of questions to the proposal, including modern ones. I strongly suggest you ask five questions yourself, too, to help gain momentum.

Ought someone try to sway users on other language websites like Language Learning or Linguistics SE? Can someone advertise on their Meta websites?

Perhaps someone can. But frankly, you should have figured this out before starting the proposal. The time limits are so harsh that you should have a marketing strategy before you launch it, so that it really gets going during the first week. I imagine you remember the fate of the previous Greek proposals well enough.

How can we encourage more Latin Language SE users to support the Greek proposal?

By bringing it up on meta and in chat. Maybe you can leave an advertising comment under some new Greek questions here. Newly asked questions get most eyes on them, so they work best. If this meta question becomes popular enough, it will show up in the hot meta posts panel.

It is also possible to make a meta post featured or to have a "community event" which is essentially a small add with some text and a link to the proposal. However, I am unwilling to start such active promotion until the Greek proposal is clearer and has satisfied the initial minimum activity criteria. Who did you plan to contact concerning modern Greek and have you been in contact with people before starting the proposal? Is Greek from all eras even on topic on the proposed site? Why is it classified under arts instead of culture like other language proposals? What is different from earlier Greek proposals?

In principle, the Stack Exchange network does not allow soliciting new users to a proposed site from other sites. You should find your users in other places. The Latin site will — in my opinion at least — be lenient towards such advertisement when it comes to Greek, Hebrew, and maybe some other closely related topics. The idea is that you should bring a pre-existing Greek community to A51 to start a new site, not come alone and expect a community to emerge at A51. However, it is not clear where to find that community.

If you find a healthy and enthusiastic community wanting to build such a site, please feel free to have them propose it. Unfortunately, this subject has been proposed multiple times without a identifying a community to actually build it. Subjects posted repeatedly with vague or unsubstantiated claims of support are no longer supported by this process. See Changes to the Area 51 process. Submitting the same proposal over and over hoping someday it might just barely make it through is not how you lead up to a healthy site launch.

The Greek proposal was closed with this announcement from Robert:

This subject has been proposed multiple times without the support of a community to actually build it. After 30 proposals for subjects showing a similar disregard for the ability to actual see it through, please do not continue submitting proposals if you do not have a community to support it. See Changes to the Area 51 process.

Conclusion: No more Greek proposals unless there is a completely new approach with more people and careful planning involved. (I would permit asking for planning help on our meta, but this Latin site will not be enough to supply users for a healthy Greek start-up.)

Not the answer you're looking for? Browse other questions tagged discussion .

24
Should all-Latin questions be permitted?
9
Should we encourage or discourage the use of macrons?
10
What should be the guidelines for inviting non-English speakers
6
Let's get an ad for Latin.SE posted on English Language & Usage
12
Graduate Latin Language SE from beta status (now with answer!)