Let's get an ad for Latin.SE posted on English Language & Usage

In What can we do to advertise Latin.SE?, I mentioned the possibility of creating community promotion ads for other sites. An ad for our site is currently one of several ads in the rotation on Christianity.SE, and is generating an average of about 4 visits/day.

Sites can only accept community promotion ads if they have graduated, so sites like French, Spanish, and Linguistics are unfortunately not possibilities. However, English Language & Usage.SE is a good option – many of its users have an academic interest in English and etymology, and it gets nearly 20 times the traffic of Christianity.SE.

So, who has an idea for an ad? It ought to appeal to English language experts and enthusiasts, especially those who might also have an interest in Latin. Here are the technical instructions, along with some existing examples. Two key parameters are 300x250 or 600x500 pixels and either a colored background or a border.

This ad is posted on ELU's meta, and has started generating hits for us.

Here's an ad possibility I've created. All the words in the background come directly from Latin – no Romance intermediaries. Of course, the 30% number is more general. Feedback is welcome! 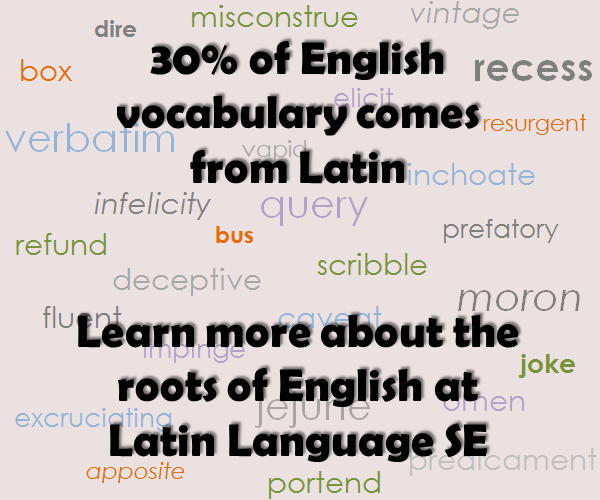 To be really honest, the quality of the questions and answers on the Latin site is immensely superior to that of those on the English site. Are we sure that we want to invite the sort of questions that are debated there? Also, rather than attracting the narrow-minded Christians who populate the "Christianity" site I think we ought to lure the better class of users who populate the "Biblical hermeneutics" site.

Not the answer you're looking for? Browse other questions tagged discussion site-promotion .

Welcome!
This site is for discussion about Latin Language Stack Exchange. You must have an account there to participate.
Help
Visit chat

8
What can we do to advertise Latin.SE?

10
How should a tag for changes in Latin language through time be named?
15
Latin language eras
9
What should be the guidelines for inviting non-English speakers
8
What can we do to advertise Latin.SE?
3
Is it ok to ask a big list question for all words corresponding to an English word?
4
What do you think about a flier for our site?
6
Should We Get Rid of the Translation Tag?
6
Should Latin.SE introduce topic challenges?
4
What should our exact scope be?